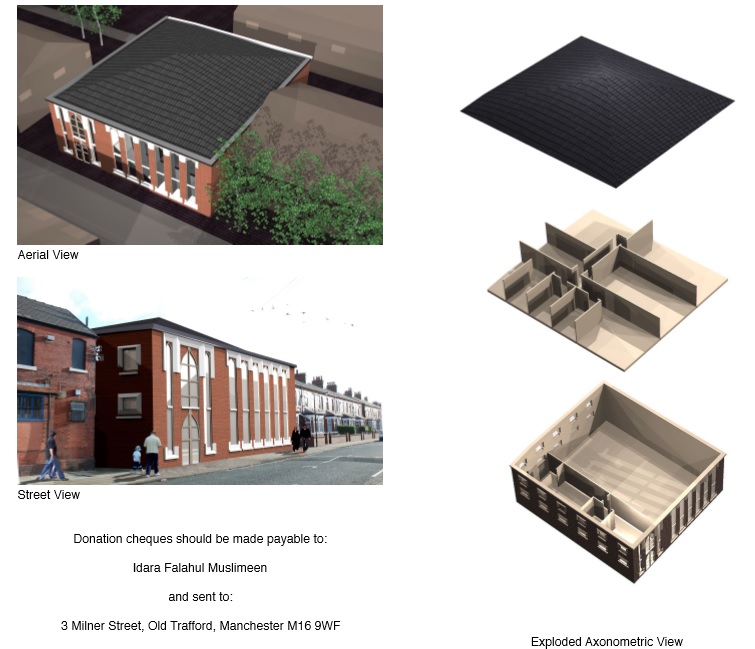 Al-Falah Trust (Manchester) is voluntary organization, which registered under Trust Registration Act. It registered on 26 April 2009 by a group of likeminded social workers who were working in the fields of basic, education, Islamic education.

Since the establishment of the organization we are mainly concentrating in the Islamic educational development, other capacity building and also working for the eradication of different social evils. In the contemporary competitive world education is playing a vital role. In this backdrop we are trying to address the Islamic educational achieve a self reliant status in the World. We have needed a well building for better Islamic Education.

Looking forward for your kind cooperation,

Organization at a glance

Introduction of the organization.

Our charity is non-political and non-profit-making United Kingdom registered charity. The charity began in 2000 and was registered in the year 2009 under the name of Idara falahul Muslimeen. Our work is governed by our constitution (Trust Deed). Some of our aims and objectives are as below.

Idara falahul Muslimeen, is a Islamic & modern Educational Institute and a Welfare Organisation. The organisation was established in the year 2000. Alhamdulillah, the organisation has progressed since then and continues to do so due to your well wishes and donations.

An Introduction of “ Idara  falahul Muslimeen “_an Islamic educational institution, its aims, objectives and development plans is furnished below for your kind perusal. Well-wishers of Islamic institutions are requested to spare some of their valuable time to go through it.

Need a new building for Idara  falahul Muslimeen for Madrassa & school. The total cost for the project is approximately £1,230,000. We are desperate for funds to complete the project. We implore you to help us in our noble efforts. To view the master plan and progress of the building.

As per plan, the proposed Idara falahul Muslimeen will be as under:-
The new proposed building will be 2 storied where 300 students will be admitted

This fully fledged Madrasah will be build in resemble to darul uloom  . This institution will be the pillar of education and peace of this area. This Madrasah will protect the natural calamity and will provide the security of the people of this area by the Muslim Dua and Istigfar.-This great expectation will fulfill by the grace of Allah. The educational curriculum will be from primary class to higher studies. Moedrn and technical education will be taught besides this Islamic Education. The Madrasah will be extended with the facility.

Objectives of the Project

Quality in delivery of education: –

The emphasis will now be on improving quality of education being imparted in the schools. Improved and child-friendly text books, teaching Learning Materials, Action Research by the practicing teachers to identify hard-spots in learning, improving the system of lesson- transaction within the class room will form the thrust areas in the field of pedagogical improvement. The approach will include the various pedagogy related inputs in a comprehensive way based on locally defined needs and field realities. The practicing teachers would be involved in the process of pedagogical change, revival and renewal. Solutions would be arrived at locally. The school will become the focal point providing the requisite growth environment not only for the students but also the teachers.

Community mobilization will not be confined to merely encouraging the community to provide finances for creating physical assets at the level. Nor will this mean the interpolation of another inspectoral/ supervisory level in the administrative hierarchy of education. It would mean involving and enlisting the support of the community as partners in the process of change happening in the schools. The community would be fully involved on all issues relating to developing the school plan for the better education.

Facilities in the proposed school

Education is a process which will enable a person to become a better member in the trust which he lives. The qualitative teaching is very much important in every educational institutions it is only possible through the qualified teaching staff and other supporting staffs. So this School will recruit necessary administrative, teaching and non-teaching staffs for the better function of the institution.

Monthly monitoring report, Parents Teacher Association meeting reports and action taken report etc will be documented properly. All other information regarding the institution will be prepared and well maintained in the documentation wing of the institution. More over the project progress report and the annual report will be prepared and submitted to the funding agency and to the concerned government authorities.

After completion of the project educational Programme will be sustained with the involvement and participation of community people. Programme will be run with the joint efforts of organization and community itself. Following points can be described as an important part of post project sustainability.

I Qari Zuber Badat Chief functionary of the Trust will have the overall responsibility for project development, management and coordination with support from project coordinator, and other staff members.  The project coordinator is responsible for project implementation, financial, material and personnel management as well as for liaison with local government officials with regard to the development programmes. The activities and the administration of the Institute will be under the supervision of the Institute Director and principal.

Director, project coordinator, School Principal, , teachers and other staff will participate and review the progress of the project. The monthly action plan will be review and the director will monitor the same in the monthly meetings.

The funding agency will conduct yearly evaluation meetings to check the progress of the programmes and it will also evaluate the activities of Institution.

Introduction of the Project Area

Manchester is situated in the south-central part of North West England, fringed by the Cheshire Plain to the south and the Pennines to the north and east. The recorded history of Manchester began with the civilian settlement associated with the Roman fort of Mamucium, which was established in c. 79 AD on a sandstone bluff near the confluence of the rivers Medlock and Irwell. Historically, most of the city was a part of Lancashire, although areas south of the River Mersey were in Cheshire. Throughout the Middle Ages Manchester remained a manorial township, but it began to expand “at an astonishing rate” around the turn of the 19th century. Manchester’s unplanned urbanization was brought on by a boom in textile manufacture during the Industrial Revolutionand resulted in it becoming the world’s first industrialized city An early-19th-century factory building boom transformed Manchester from a township into a major mill town and borough that was granted city status in 1853. In 1877, the Manchester Town Hall was built and in 1894 the Manchester Ship Canal was opened, creating the Port of Manchester.

The city is notable for its architecture, culture, music scene, media links, scientific and engineering output, social impact and sporting connections. Manchester’s sports clubs include Premier League football teams, Manchester City and Manchester United. Manchester was the site of one of the world’s first railway stations, and the place where scientists first split the atom and developed the first stored-program computer. Manchester is served by two universities, including the largest single-site university in the UK, and has the country’s third largest urban economy. Manchester is also the third-most visited city in the UK by foreign visitors, after London and Edinburgh, and the most visited in England outside London.

At 53°28′0″N 2°14′0″W, 160 miles (257 km) northwest of London, Manchester lies in a bowl-shaped land area bordered to the north and east by the Pennines, a mountain chain that runs the length of northern England, and to the south by the Cheshire Plain. The city centre is on the east bank of the River Irwell, near its confluences with the Rivers Medlock and Irk, and is relatively low-lying, being between 115 to 138 feet (35 to 42 metres) above sea level. The River Mersey flows through the south of Manchester. Much of the inner city, especially in the south, is flat, offering extensive views from many high-rise buildings in the city of the foothills and moors of the Pennines, which can often be capped with snow in the winter months. Manchester’s geographic features were highly influential in its early development as the world’s first industrial city. These features are its climate, its proximity to a seaport at Liverpool, the availability of water power from its rivers, and its nearby coal reserves.

The United Kingdom Census 2001 showed a total resident population for Manchester of 392,819, a 9.2% decline from the 1991 census. Approximately 83,000 were aged under 16, 285,000 were aged 16–74, and 25,000 aged 75 and over.[67] According to the 2001 census, 85.2% of Manchester’s population claim they have been born in the UK. Inhabitants of Manchester are known as Mancunians or Mancs for short. The census also revealed that Manchester had the second-lowest proportion of the population in employment of any local authority in the UK. In part this was due to the high proportion of students as Manchester had the highest proportion of students amongst local authorities. A 2007 report noted “60 per cent of Manchester people are living in some of the UK’s most deprived areas”.[68]

Historically the population of Manchester began to increase rapidly during the Victorian era, peaking at 766,311 in 1931. From then the population began to decrease rapidly, due to slum clearance and the increased building of social housing overspill estates by Manchester City Council after the Second World War such as Hattersley and Langley.

The inhabitants of Manchester, as of many other large cities, are religiously diverse. At the time of the 2001 census, 62.4% of the city’s population was Christian, and 9.1% Muslim. Other religions represented less than 1% each. The proportion of people without a religion (16%) was above the national average (14.8%), with 9.7% not stating their religion. The Jewish population is second only to London, and Greater Manchester also has one of the largest Muslim populations. The population of Manchester shown with other boroughs in the Greater Manchester county from 1801 to 2011.

The percentage of the population in Manchester who reported themselves as living in the same household in a same-sex relationship was 0.4%, compared to the English national average of 0.2%.